One of my best friends from childhood got married this weekend. Natasha and Noah have been together for a long time, and they were finally able to become husband and wife on Saturday May 5th. As Natasha’s family is from India, we were all honored to be involved in a traditional Indian wedding. There were a few Jewish traditions included from Noah’s family as well, but we will wait to explore those until a later post on their wedding day.

The first wedding event was the Mehndi ceremony.

Mehndi is the application of henna as a temporary decoration of the skin. It is a ceremonial art form where intricate patterns are painted onto the bride’s hands and feet before the wedding ceremonies. Hidden in the patterns, the design includes the groom’s name. His challenge is to find his name. For Natasha’s Mehndi, Noah’s name was written in the palm of her hand (can be seen in the bottom picture of her right palm). 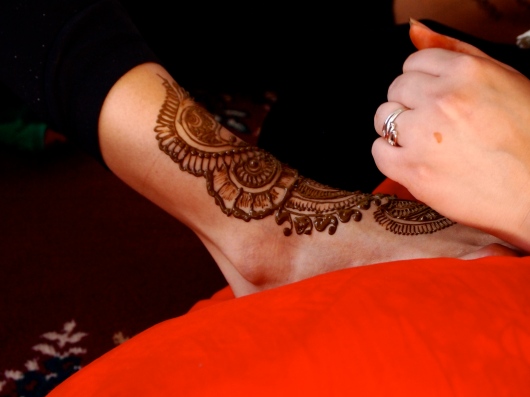 As I understand it, the old tradition was to apply henna to the bride only. In modern times, many of the other women involved in the Mehndi get designs applied as well. As a bridesmaid, I jumped at the opportunity.

Henna is applied to the skin from small cones filled with the paste. The paste then dries on the skin. As it dries, it stains the skin below. Soon the paste begins to crack and brush off, and then you are left with a beautiful reddish-brown stain on the skin. It is a beautiful ritual.

Natasha looked positively stunning as she sat on her “throne” during her Mehndi. She was surrounded by her female friends and family members, and she definitely had the most beautiful designs. Both the backs and palms of her hands were completed covered, and her feet had beautiful designs as well. Following the Mehndi application, the women gathered together to sing, play the drums, and dance. 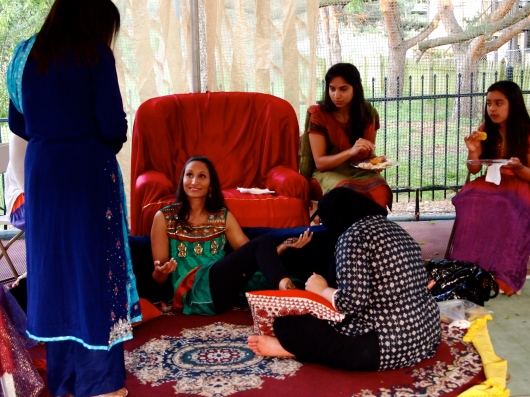 The Mehndi ceremony was a beautiful way to kick off the weekend of wedding festivities. Natasha looked beautiful, as always, and everyone had a wonderful time. The food was delicious, the music and dancing were joyful. It was a wonderful evening and a great way to start a beautiful weekend.

3 responses to “An Indian Wedding: beginning the weekend with the Mehndi ceremony”