Enchanted islands.  That is the best way to describe them.  When Terry and I left Dubrovnik to begin our week sailing the Dalmatian Coast, we expected a great trip.  But we did not believe it could match the experience we had in Dubrovnik. We were wrong. We expected to see drab buildings left over from World War II followed by years of communist rule.  We were wrong again. With six close friends, we boarded the gulet, “Fortuna Dalmata,” in the harbor outside Dubrovnik and set sail to visit islands, towns and villages as enchanting as their names suggest: Vis, Hvar, Krk, and Komiza.

Our crew included experienced sailors and an incredible cook.  They made our island hopping experience as relaxed as it was satisfying. Our food was as good as we would expect in a first class restaurant.  Not surprising, since our chef’s family owns a fine restaurant in Split.  Breakfast included chocolate croissants, fruit, eggs and cereal.  Dinners included veal shank and lobster.  What could be better than dinner served looking out over the sea to the islands nearby. 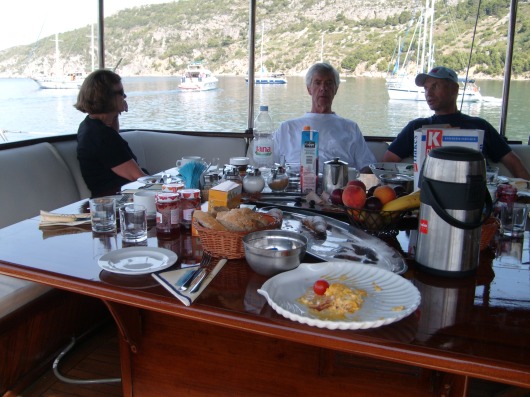 Only 69 of the 1000 or more islands along the Croatian coast are inhabited. The  entire coast has a rich history that extends back long before the birth of Christ.  Various islands and towns along the coast were inhabited by–and/or did battle with–the Romans, Byzantines, Ottomans, Turks and Venetians among others. Many had ruins from those periods.  The fortifications on some islands were evidence of a long history of war. The islands we visited included picturesque rural villages with basic agricultural equipment and few automobiles and taxis. Tractors were common sights.

It was not uncommon to land on islands with Greek and Roman ruins that spoke to their influence along the Dalmatian Coast.

There were shrines and statues to unknown heros.  The sacred nature of the temples and the sculptures, both Christian and pre-Christian were apparent all around us.  The detail of the carving and the powerful portrayals of worship evidence that the populations along the coast were highly religious throughout Croatia’s history.

The 16th century Church of Sv Nikola at Komiza dominated the hillside as it rose up from the terraced land and towers over the cypress.  It’s sleek lines and sculptured beauty seem to rise up to meet the heavens. 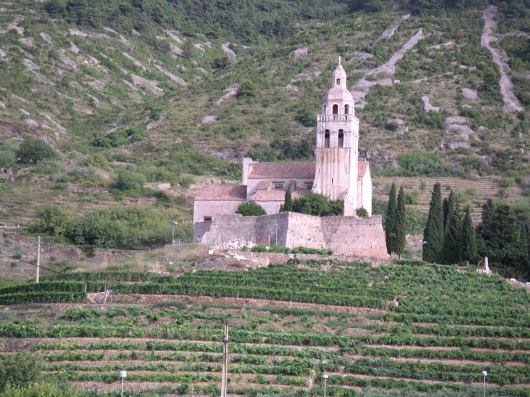 While the beauty of the architecture on Vis and Hvar inspired us with man’s creative spirit, we also visited islands where the natural
beauty appeared incapable of existing anywhere other than an artist’s canvas. 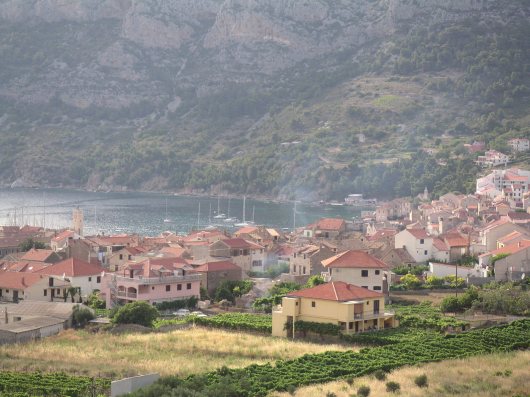 Each island had it’s own personality.  We could be inspired in the morning by nature and arrive in the evening on an island where the ornate buildings evidenced centuries of affluence and commerce long before the Americas entered the world stage.  As you can see, I am way underdressed for this highly sophisticated and elegant harbor town.

Terry was similarly decked out in his favorite sailing stripes as he walked the gang-plank from the Fortuna to the dock.

As we look at the serenity of the coastal town below, it is hard to believe that only twenty years ago Croatia was involved in heavy fighting that left much of the country in shambles.  It was just as difficult to understand that this wonderful part of the world has seen far more than its share of political and military turmoil from pre-historic times to the present.

There wasn’t an island that we didn’t want to visit longer.  Many of the uninhabited islands are little more than rocky crags dotting the water between the larger islands. They cluster together like hens and chickens.

To show you even more of our favorite sites in the Croatian Islands we will post Part 2 later.