July 10, 2012: the American and National Leagues’ best players compete in the 83rd All Star Game, right here in Kansas City.  If you live here, you just can’t avoid the excitement.  Cowtown has always been in love with sport–and celebrations of all sorts. We also love to show off our city.  The best of all worlds for us.

Kansas City is all spiffed up to look its best for the athletes, their wives, the fans and the tourists who have blessed our fair city with their presence, and their dollars.  And everything is blue.  Bright blue.  Fountains on the Country Club Plaza, Barney Allis Plaza and at Crown Center spew out vivid blue water. 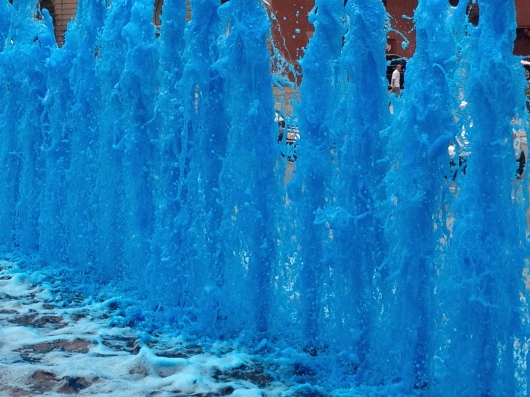 The last All Star game in Kansas City was in 1973.  The National League won.  39 years later, we are ready to again host this spectacular event.  In fact 3 days of special events are being scheduled throughout the Kansas City to Plaza corridor, all of the places that most symbolize our home town spirit.  Well, and Kauffman Stadium, of course!

Hotels in and around Kansas City are full.  Streets on the Plaza began to close by late afternoon Sunday in preparation for Tuesday’s parade. This giant baseball sits on Wornall Road, adjacent to Michael Kors, on the Plaza.  It is directly on the route of the All star parade scheduled Tuesday afternoon. 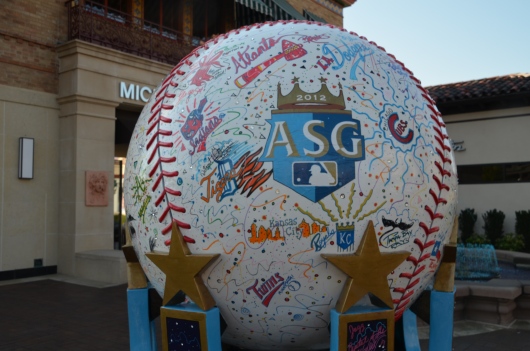 Justin Verlander of the Detroit Tigers and Matt Cain of the San Francisco Giants face each other as starting pitchers.  Kansas City’s only home town player is Billy Butler.  But every Royals fan will be rooting for him.  Kauffman Stadium is all dressed up and ready to take center stage.   There is so much energy in the air.

Kansas City takes great pride in showing off our wonderful city during the festivities.  Not only are key intersections labeled with All Star regalia, even fire hydrants have been painted for the occasion, blue of course.

There are decorations on store windows, intersections and even a bit of whimsy on the lamp poles.  As the day ends Monday, it is quiet on the Plaza.  The entertainment tonight is at Kauffman Stadium.The game culminates tomorrow’s events.

Even the elegant Intercontinental Hotel has succumbed to baseball fever, and shares the frenzy for royal blue.

Take us out to the ballgame!