Morgan Vachel Dillingham was born in 1843 to Joshua Robert Dillingham and Susan Jane Walker.  He fought, and was wounded, in the Civil War.  He served with confederate forces.  On his return from the war, he found his family home had been inhabited by the Mock family.  He married Melvina Mock.  The log cabin in which they lived is now located at Missouri Town.

Morgan and Melvina ultimately built the Dillingham home at 15th and Main, in Blue Springs, Missouri.  They owned a general “mercantile” store. He was a bank vice president/president. [1]  His family had a large farm in Eastern Jackson County, Mo. This photograph of the Dillingham family in 1914 identifies a couple, “Ma D and Pa D” presumably Morgan and Melvina.

Known as the Brownfield House, it is where David and Estella raised their family.

David owned a gas station and a store. In January, 1955, David was shot and killed in a botched robbery at his store.

The Brownfield House was sold privately and has been beautifully restored.  The Dillingham House was eventually sold to Narra Lewis who, in 1977, sold the home to the Blue Springs Historical Society. It is now a museum, and also houses the historical society.

The museum has been decorated in period pieces consistent with the styles of the early 1900’s, approximately 100 years ago. 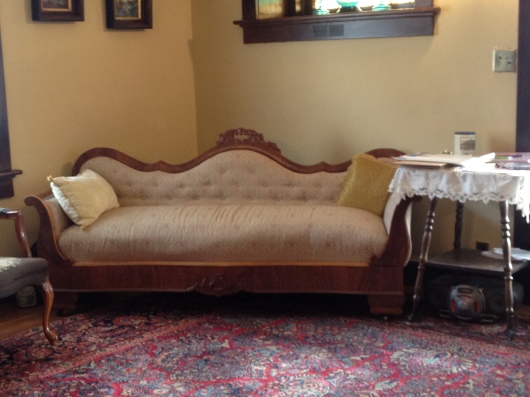 While the furnishings are not original to the home, the interior of the house nonetheless reflects the style of the early 1900’s.  It is lovely, reflecting the graciousness of that time.

The museum is open to the public for only a few hours a week.  It is worth a call to arrange a tour and to glimpse a slice of life in the earliest years of the 20th century.

[1]  Sources are inconsistent as to his role at the bank

6 responses to “Back In Time–The Dillingham-Lewis Museum”