Brazil has lost a legend:  Oscar Niemeyer died in Rio de Janeiro, Brazil, just 10 days before his 105th birthday.  Any description of his life and work must necessarily include words like: Brilliant, Creative, Celebrated.  These terms barely touch the genius of Oscar Niemeyer. [1]

Though he favored his works throughout Europe, he is probably most widely known for his impact on the design and structure of modern Brasilia, the capital of Brazil.

Niemeyer was educated at the Escola de Belas Artes.  His architectural career began in the early 1930’s. He almost immediately gained recognition for his unique modern style and for a series of early architectural gems.

He designed the Church of St. Francis of Assisi, in Minas Gerais, Brazil.[2]

Completed 70 years ago, in 1943, it was  designed in the “organic modern style”.  The church was not without its critics.  The Archbishop of the region described it as”the devil’s bomb shelter.  [3]

His most recognizable works are incorporated into Brasilia, designed in the late 1950’s and formally recognized as the capital of Brazil in 1960. It was designated as a UNESCO World Heritage Site in 1987.

Brasilia was designed as a planned futuristic city in which the quality of living was enhanced by incorporating forested areas into residential communities, distributing small commercial areas throughout the city, adding cafes, parks and entertainment areas as well as an efficient transit system. These attributes, combined with the gentle rhythm of the architecture are seen, even today, as beautifying and enhancing the life and culture of a community.

The Brasilia Cathedral, officially the Metropolitan Cathedral of Our Lady Aparecida, built in 1958.  It is designed in the form of a crown, with its central glass roof, it is described as being opened to the heavens. [ 4]

Niemeyer has been widely recognized and has received prestigious awards, including the Pritzker Prize in 1988 and the Royal Gold Medal for Architecture from the Royal Institute of British Architects in 1998.

While it is acknowledged he designed or influenced more than 500 buildings around the world, he is best known for his contribution to Brazilian architecture.  A modernist, he 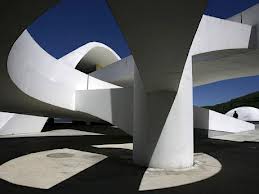 shunned sharp corners and, instead, incorporated sweeping curves in his works.[5]  He described his love of curves:  “The curve I find in the mountains of my country, in the sinuousness of its rivers, in the waves of the ocean and on the body of the beloved woman.”

A true creative genius, his impact on urban design cannot be overstated.  His genius will live on in the buildings he designed, and those that will continue to be built in their image.