The Havana Bay Harbor has a past as violent as its revolution.  The Spanish founded Havana in about 1519 as a part of its colonial empire.  Spain’s interest in Havana rested, in large part, because the Bay of Havana offered a secure port for the Spanish Galleons crossing from the New World to Spain. 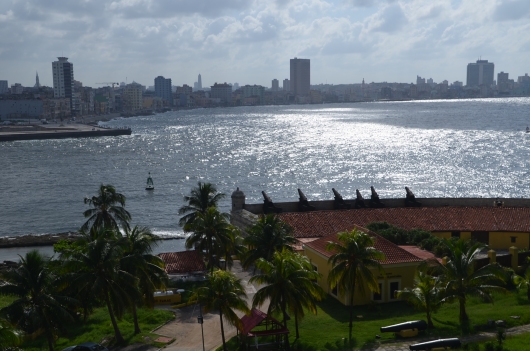 Because of the wealth that passed through the city, old Havana was vulnerable to French, English and Dutch Corsairs. [1] The massive fortifications of Morro Castle/Castillo de los Tres Reyes del Morro were constructed by the Spanish beginning in 1589 to protect against attacks by these pirates.  Morro Castle sits across the harbor from another similar fortification, the Castillo de San Salvador.  With the protection of these two fortifications, and others along the Coast, Old Havana was considered to be impregnable to attack.

Considered the major fortification of the Havana’s defense system, Morro Castle stood for 150 years until it fell  during the Seven Years after a two month siege by the onslaught of English ships. 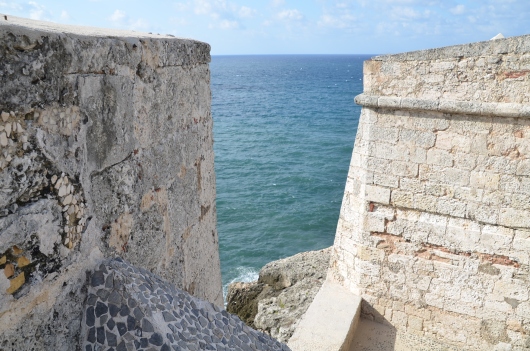 The fortifications were rebuilt and continued to protect and defend the harbor. They were used as a military base and prison.

In 1898 the USS Maine exploded and sank in Havana Harbor, in sight of these fortifications, its sinking was considered a significant cause of the Spanish-American War.

In 1959 Che captured another of the series of fortifications in the harbor, La Cabana and used it as a headquarters during one of the most brutal periods of the revolution.

For the last 63 years the forts have served no military purpose.  They are, instead, powerful symbols of Cuba’s colonial past.  The fortifications which serve as picturesque reminders of past battles, are now besieged by tourists, not enemy ships.

In 1972 Old Havana and its Fortifications was designated a UNESCO World Heritage Site because of its importance to cultural and/or natural heritage.  A total of nine sites in Cuba have been recognized for inclusion on the list of World Heritage Sites.   All of these sites were founded by early Spanish colonists.  All of these designations are reasons for pride among the Cuban people and memories among the travelers fortunate enough to visit them. 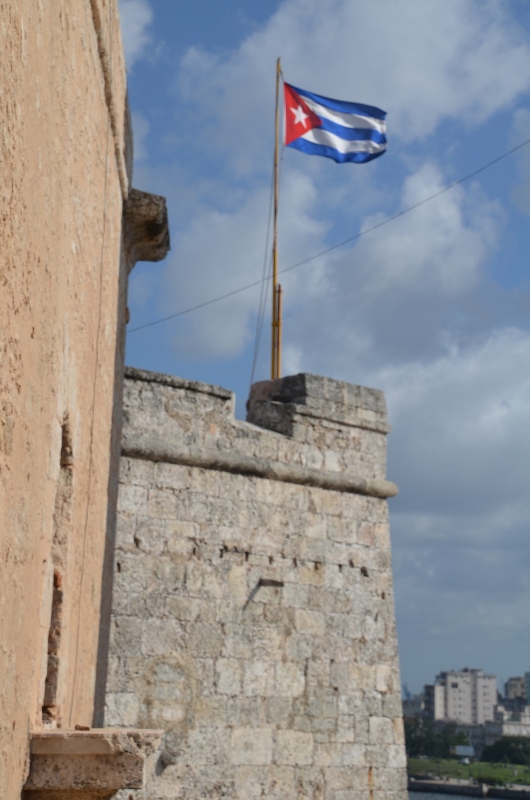 [1] Corsairs were privateers/pirates and their ships.  They plundered enemy ships and communities in the Caribbean and the Mediterranean Seas. Unlike more traditional pirates, corsairs were authorized to plunder the wealth of nations with which their governments were at war.

Like Loading...
Prague, Czech Republic is truly glorious.  Described as one of the most beautiful cities in the world, it also has been a cultural and economic center throughout much of European history.  Among the wonders of this ancient city is the Vltava River that winds by Old Town. The river is a source of transportation;  power, supplying much of Prague’s electricity; and also a major source of commerce.
18 bridges span the width of the Vltava.  Most prominent of these bridges is the massive Charles Bridge. Built in the gothic style,  construction began in 1357 and was completed in the early 1400s.  It is offers majestic views of the city and serves as a promenade for locals and tourists.  The bridge is approximately 33 feet wide and provides a venue for artists and vendors of all sorts.
The Old Town Bridge Tower, completed in 1380, is one of three watch towers guarding the bridge.  It was originally designed and built as part of the city’s fortifications to guard the Old Town from invaders.  Now it watches over locals and visitors with more peaceful plans-shopping and celebrating life.

In addition to the commercial, military and tourist uses of the bridge, it also has a significant religious place in the life of the community.  Thirty statues mounted on the Charles Bridge sit in two rows, one row on each side of the Bridge. St. Francis of Assisi, St. Wenceslas, St. John the Baptist and St. Francis Xavier are among those depicted on the statues. An elaborate statue of Christ on the Cross dominates the rest.  This sculpture replaces earlier statues of Christ erected since the 1300s. The two figures depicted here  below the cross are of the Virgin Mary and John the Baptist.

If a visitor to Prague had only one day to spend in the city, the bridge itself would be among the “must see” sites.  Prague Castle, the Jewish Cemetery and Old Town itself would also be on my must see list.  All are easily accessible and within minutes of the bridge.  What are you waiting for?

While walking around Adobe State Historic Park, these caught my attention. Old and dried out by the sun.

In my quest for greater understanding of the role of faith in government and diplomacy, I have focused on two books.  Senator John Danforth’s Faith and Politics and Secretary of State Madeleine Albright’s The Mighty and the Almighty.  Senator Danforth is a lifelong Republican.  Secretary Albright has been a Democrat since college.  Both are Episcopalian.  Each served as Ambassador to the UN.  Both advocate that people of faith should be active in government.  Both believe it is essential that there be respect for diversity both within the Christian community and that this respect must extend to those of other faiths and philosophical beliefs.

I focused on Senator Danforth in an earlier post.  Now I will focus on Secretary Albright.  She was born in Czechoslovakia.  Her father was a diplomat.  She was a child when Adolf Hitler was in power.  She emigrated with her family from Czechoslovakia to the United States after communists seized power in her homeland.  Educated at Georgetown University’s Walsh School of Foreign Service, she received her PhD from Columbia University.  Raised Catholic, she converted to the Episcopal faith and, as an adult, came to learn of her Jewish heritage.  Appointed United States Secretary of State during President Clinton’s administration, she served with great distinction from January 1997 to January 2001.

Her unique family history and academic and professional experiences give her a unique perspective on the subject of her book, the role of faith in international diplomacy.  Because of her childhood experiences, she also has special insight into what a privilege it s to live in a free and democratic society.

Secretary Albright’s book is dedicated to “those of every nation and faith who defend liberty, build peace, dispel ignorance, fight poverty, and seek justice.”  Secretary Albright weaves this dedication, and her personal family history, into a scholarly but easily readable narrative of the role of faith in the earliest years of colonial America, through the founding of the Republic and through to the challenges of international diplomacy in a nuclear age.

She discusses separately and together the roles of religious belief and morality.  Her definition of what is moral as essentially that which “we associate with good:  life, liberty, justice, prosperity, health, and peace of mind.”  She describes these characteristics as the opposite of “death, repression, lawlessness, poverty, illness, and fear.”

She worries about the dangers and challenges resulting from the increase in religious passions throughout the world.  She shares the wisdom of religious scholars that effective diplomacy requires that government leaders become more knowledgeable about the faiths and cultures of the countries with whom we interact.  She believes such knowledge is essential in our endeavors to work toward reconciliation rather than toward armed conflict.  Even as she identifies herself as an optimist, she worries “the prospect of a nuclear bomb detonated by terrorists in purported service to the Almighty is a nightmare that may one day come true.”

The Mighty and the Almighty is a goldmine for those who want a brief history of the role of religious conflict on the founding of some of the earliest American colonies, about the religious perspectives of our first four Presidents, George Washington, John Adams, Thomas Jefferson and James Madison.  Because there is no way to do more than touch the surface of the issues raised by Secretary Albright.  It is wonderful material for further posts.