Until the end of the cold war in 1991, Iron Curtain countries, including Czechoslavakia, were essentially closed to U.S. tourists.  It was more than fifteen years later that we traveled to Prague, the largest city in the Czech Republic. A major European economic and cultural center for more than 1000 years, the city resonates with the power that is its history.  In recent weeks I have learned a bit about Prague and the trauma it’s resident’s have endured through the  last 100 years. I am in awe of what I see and learn.

Totally inconsistent with my expectations, Prague is a vibrant, bustling community.  The old town looks like it is straight from a movie set.  It is colorful, dramatic and gothic. Outdoor cafes make visitors feel welcome and tourists can, for a price, enjoy a carriage ride through the city center. 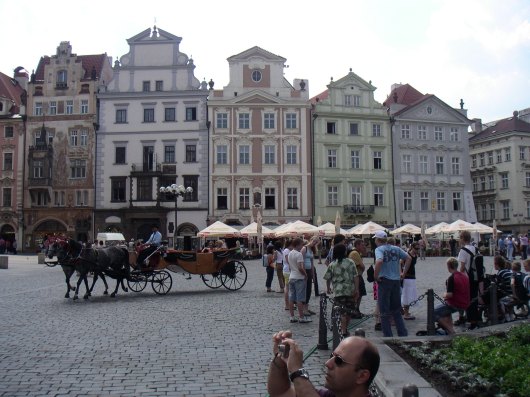 The hustle and bustle of the city surrounds us.  The mood is happy and upbeat.  The tourist trade significantly impacts the economy and seems to be welcomed by all.  The Powder Gate sits next to the palace in Old Town.  It is of ornamental, not military value.  King Vladislav II placed the foundation stone in 1475.

Everywhere you walk in Old Town you see buildings that appear to be, and often are, the work of centuries. Individual buildings, churches and sculptures date from as early as the 1300s and have survived, against all odds, despite wars and other calamities.  The Old Town Hall gives us a sense of the history of the city that is about more than the expenditure of wealth.  It is the creation of elegance.

The Old Town Hall Tower’s Astronomical Clock is a big tourist draw.  It’s intricate design includes a variety of characters. Images of Death, The Turk  and the twelve Apostles all make their appearance on the hour. 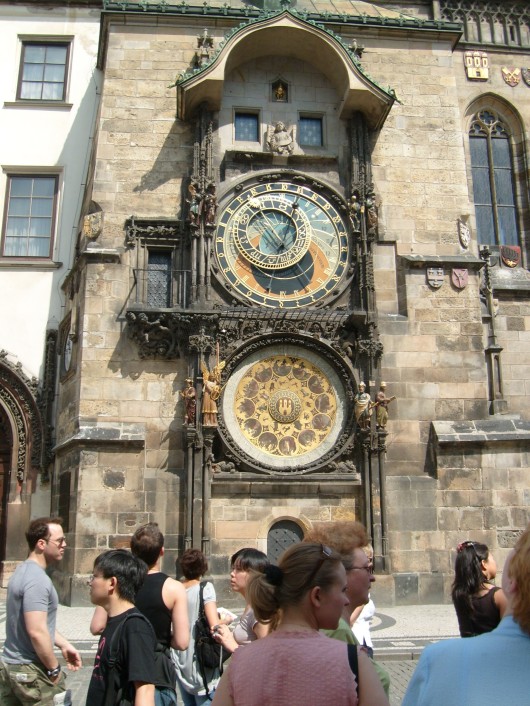 The current home of Prague’s city government is the “Nova Radnice” or New City Hall.  It is situated in Marianski Square.
Perhaps not as colorful as it’s predecessor, it is, nonetheless, a stately center of power.

The Church of Our Lady Before Tyn dominates the Old Town Square. Built in 1365 its unique twin spires and gothic appearance make it popular to tourists and travel magazines. Occupied for a time by the Hussites, it later came under the control of Catholic Jesuits.

Construction on St. Vitus’s Cathedral began in 1344.  It was finally completed in the early 1900s.  Its beauty dominates the skyline.  The tomb of Prince/St. Wenceslas, murdered in 929 A.D., is located in the cathedral.  He is best known to Christians from the Christmas Carol, “Good King Wenceslas” for his acts of charity. The intricate design of the exterior is consistent with the elegance of the cathedral’s interior.

Masterpieces of religious art cover the interiors of churches throughout the city evidencing, yet again, the power and great wealth with which Prague has been graced. The craftsmanship evidenced everywhere around us is second to none.

There is no way to capture the essence of Prague’s majestic art and architecture in a single post, nor in a hundred.  But we hope that these photographs give you a sense of the glory of its past, present and future.
Advertisement