At about 6:00 p.m., February 19, I heard an explosion at my home by Loose Park.  The local news almost immediately began coverage of a gas explosion at 48th and Belleview at JJ’s Restaurant.  The explosion caused serious damage to the restaurant.  The resulting fire leveled JJ’s and caused damage to adjacent buildings.  The extent of the damage was not yet known.

The death of Megan Cramer and the injuries to others in the area was tragic. The fact that most had left the area due to warnings or the smell of gas is no comfort to those who suffered loss.

Terry and I visited the area last Sunday morning. The damage done to JJ’s, the salon next door and the building to the North of JJ’s is evident in these photographs. 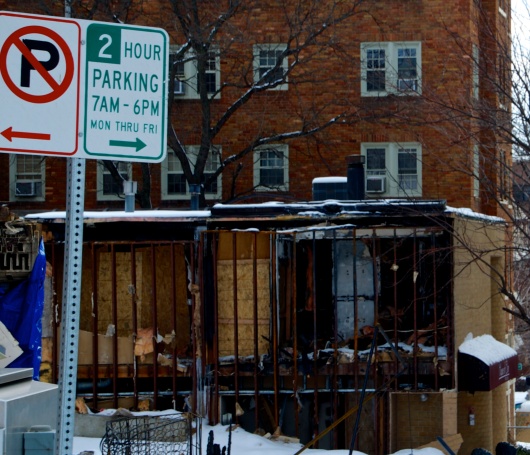 Our hearts go out to those who were affected by the explosion. JJ’s has always been a favorite, and the people and atmosphere will be missed.

Yesterday, Perceus, the dog that fled the salon next to JJ’s as a result of the blast,was found.  He endured the blast as well as life “on the streets” through two significant snowstorms that paralyzed the city in late February.  After a visit to the vet he has been returned home.  It is good to have some happy news in the midst of the tragedy.

It’s beginning to look a lot like Christmas, here in Kansas City. Hope you have a wonderful holiday season.

Benjamin Franklin is one of our nation’s most beloved and celebrated founder. Truly a leader of men, he was a diplomat to France, author of the original Poor Richard’s Almanack, authored portions of the Declaration of Independence and was a delegate to the Constitutional Convention. And that is just the beginning of his talents and accomplishments.

Noted for both his eloquent descriptions of life and government, he could be witty, pithy and wise.  This wonderful sculpture of Franklin, created by George Lundeen, [1] sits by Latte Land on the Country Club Plaza.  Feel free to sit with him for a while.  There is plenty of room on the bench.

Where liberty dwells, there is my country [2]

[1]George Lundeen sculpted this wonderful bronze statue of Benjamin Franklin.  It is a warm representation of Franklin, one of a series of similar sculptures, large and small.  Lundeen’s creations include national heroes, child athletes, newspaper boys, Native Americans and others are charming and seem to capture the spirit of our national character.

Have a wonderful day!!

Nothing warms my heart more than Meg’s presence in my town, my house, and my car. Hanging out, talking about life, work, and the challenges of both, are the basis of solid bonds.  Despite the sudden cooling of the weather around me, my heart overflows with the warmth of Meg’s presence.

Meg and Jake were in town for a brief visit in the midst of their frantic lives.  Visiting Kansas City for a wedding they made full use of the weekend with visits with family, friends and elderly relatives (no, I don’t mean Terry and me).  They kept a schedule almost as busy as if they were working back in California.  Much of the weekend was fun, but it was fun with a purpose. Because of that, the luxury of lunch on the Country Club Plaza was our special time, just the two of us enjoying a gorgeous afternoon. 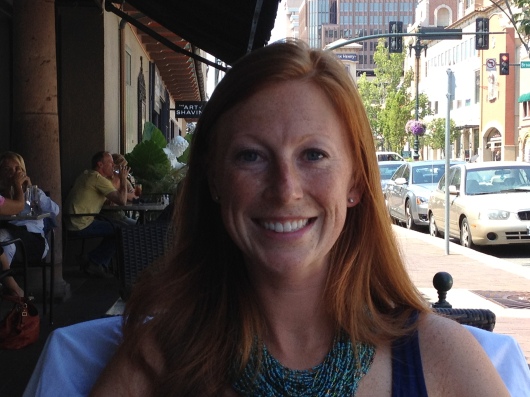 We shopped for clothing to spiff up her wardrobe, focused on outfits that she can transition from office to work related social events to casual weekend outings.  Our friend, Martha Jane, now works at this great little shop we learned might have clothes for Meg’s needs.  Her expertise made this a fun and successful adventure. But no, the glittery gold dress was not among our purchases.

Friday we attended a wedding of Meg’s friend from UMKC Law School.  While scheduled for the Rose Garden at Loose Park, the weather, particularly the remnants of Hurricane Issac, had other plans.  It rained all day, forcing the wedding inside.  Californo’s, in Westport, efficiently transitioned the reception area to a wedding venue and back to a reception hall in record time.  The bride looked great, we had a fun evening and our parks and gardens got much needed moisture.

Friday was a record day for “views” on our blog.  We didn’t understand it until Jake explained that he used our blog as the equivalent of an old-fashioned scrapbook, showing his family photographs from their travels and California adventures.

Ultimately it was time for their return to Petaluma.  I will miss them, but it is a happy sadness, knowing that their lives, and ours, are rich and full of adventure.

What can be more fun for adults and children on a warm summer evening than an open air carriage ride.  Shaped much like Cinderella’s carriage, this carriage is a popular entertainment for tourists visiting the Plaza throughout the year.  But it is a ride made for summer evenings. 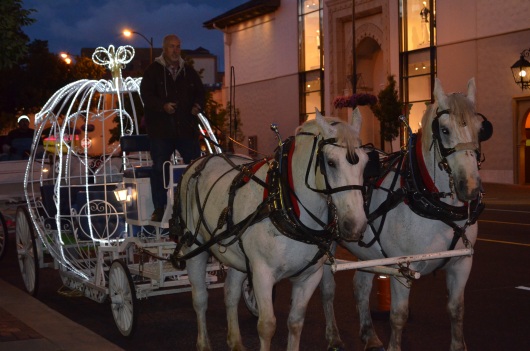 The horses may be somewhat past their prime, but they are docile and patient and decked out with braided manes.

Just another beautiful experience for tourists to Kansas City.

The races are held under the  “Sister Cities International Bridge”, where life-sized Chinese warriors guard the foot bridge as it crosses Brush Creek.  The imposing bronze warriors are symbolic of the rich culture of China’s ancient civilization as well as the friendship between our cities. 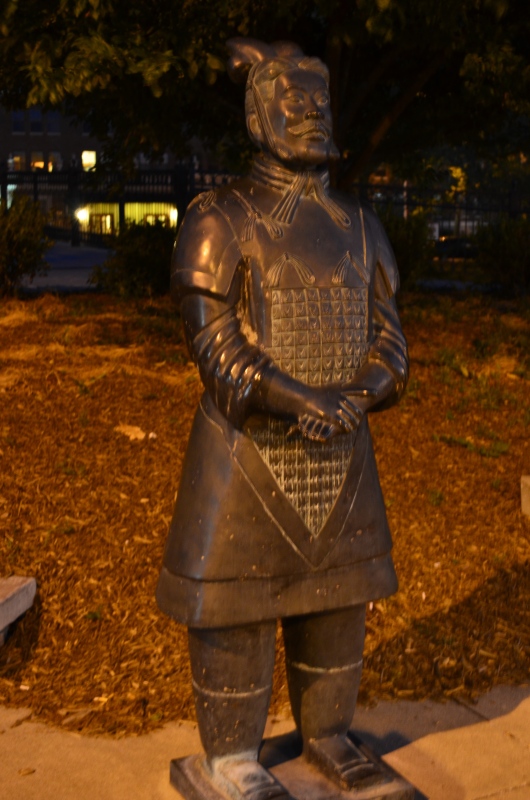 Festive red ornaments crossing the bridge announce the 12th annual Dragon Boat races held Saturday, June 9, 2012.  The races are part of an annual celebration of the friendship between the people of these two cities.

The celebration includes races involving local university students and corporate teams as well as representatives of China. The event  includes a wonderful display of pageantry, speeches and a colorful dose of Chinese culture.

While the celebrations include a ceremony called “waking the dragon”, the dragons of most importance are the decorative dragons that embellish the front of each boat.  These dragons are whimsical and colorfully painted. 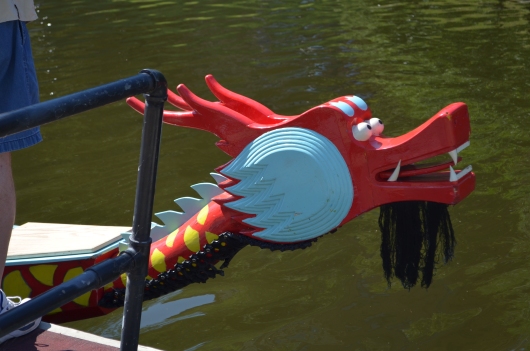 At this year’s event, Mayor Sly James not only greeted visitors, he spoke to the crowd, encouraged the celebrants, and also agreed to be  the drummer for Kansas City’s home town team.  Way to go, Sly!

Here, a drummer beats the rhythm for the crew in the first race.  The crew paddles as quickly, or as slowly, as the cadence of the drummer. 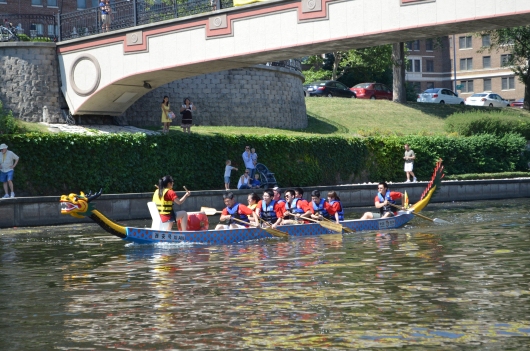 On this happy day there were no worries about the politics of our two countries, of the balance of trade, or of jobs lost and found.  It was a celebration and a time of friendship.  A good time was had by all.

The Country Club Plaza is always beautiful.  The seasons of the year and the time of day significantly impact the images that we see.  These photographs were taken late in the evening, just after the sun set, but before it was completely dark.  (These scenes are best viewed with your brightness setting on high.) 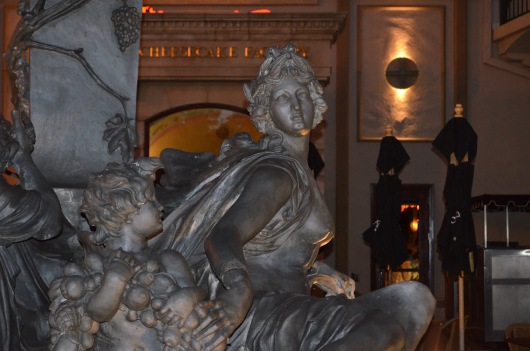 From the Fountain of Bacchus Sculpture, located at the Chandler Court at 47th & Wyandotte, is made of 10,000 pounds of cast lead. 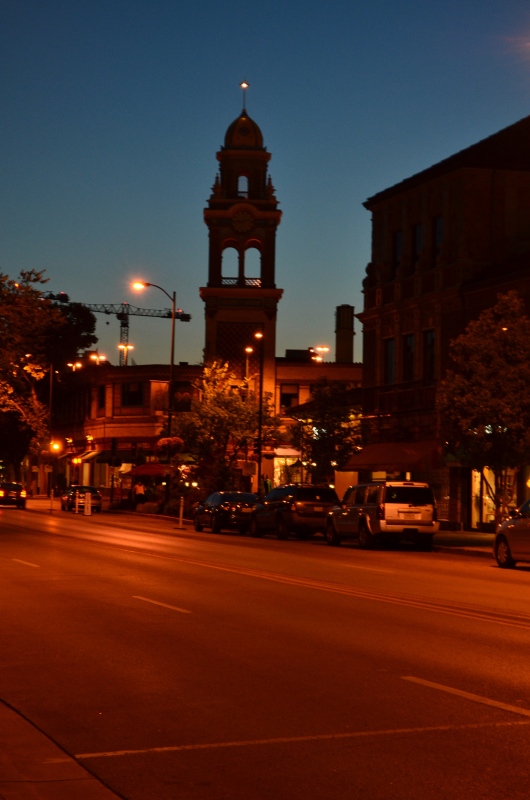 Night view of Broadway Bridge and Brush Creek, on the Country Club Plaza

The Statute of Ruth, representing the Biblical Ruth, is located at 48th & Wyandotte.  It is formed from white Carrara marble.

Kansas City’s most famous outdoor sculpture, The Scout, stands high in the hills of Penn Valley Park.  Created by Cyrus E. Dallin, it won a gold medal at the 1915 Panama-Pacific International Exposition in San Francisco.  Purchased by the “Kids of Kansas City” it was dedicated in 1922 as a permanent memorial to local Native American tribes.  I am fortunate to drive by it every work day as I make my way, with thousands of others, along Southwest Trafficway toward downtown Kansas City.  The Scout’s image is on local advertisements, and it inspired the name of an investment fund and a sports team. 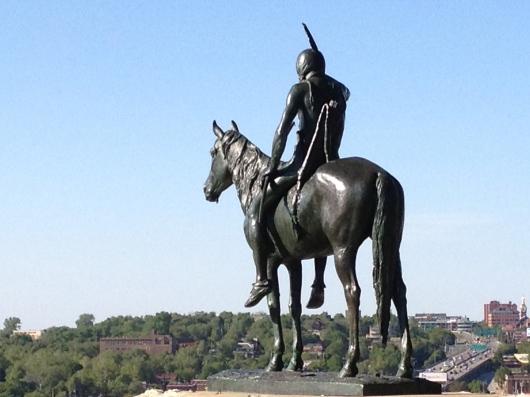 Equally magnificent, if not as well-known, is the statute of Massasoit, (Ousamequin) Great Sachem of the Wampanoag, identified as a “friend of pilgrams”, created by Cyrus Dallin and donated to the community by Mr. & Mrs. Miller Nichols.  It stands at 47th & Main, on the East edge of the Country Club Plaza.  Massasoit protected the Pilgram’s from starvation in 1621, shortly after the founding of Plymouth Plantation.  He also negotiated a peace treaty between an affiliation of tribal leaders and the English settlers, which continued throughout his lifetime.  Unfortunately after his death in 1662, peace did not continue.  Four of his five children died in “King Philip’s War” fought from 1675-8 between the English colonists and local Native American tribes.

Robert Macifie Scriver is the sculptor of this powerful image of a cowboy astride a massive bull.  Aptly titled “An Honest Try”, it is inevitable that the bull will win this contest between man and beast.  But it is a wonderful depiction of what we often call the “wild west”.   Easy to miss in a tour of Kansas City art treasures, it is located on Main Street, at the New Board of Trade Building on the South East edge of the Plaza. 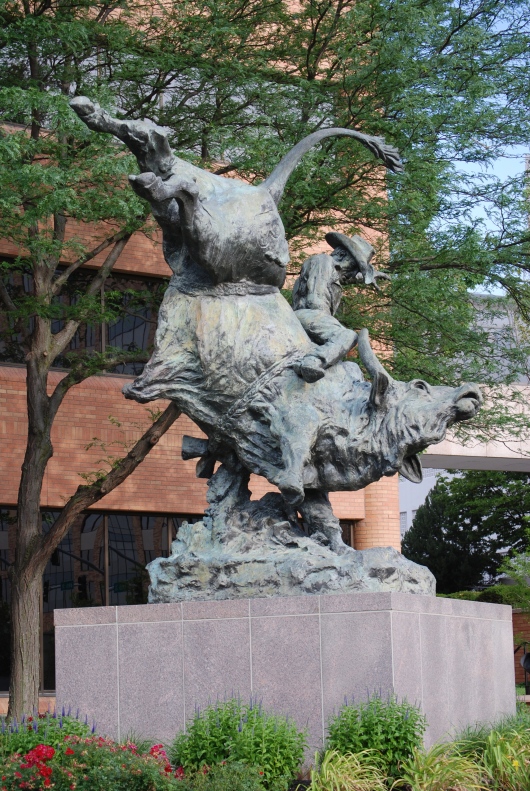 It is a beautiful week in Kansas City. The tulips are in full bloom.

Pansies are everywhere, even in a “wishing well”.

The trees are starting to bud.

The Plaza is all decked out for Easter, with an oversized rabbit, turtle and other brightly colored animals for children to climb on and be photographed with.

Most exciting, the first of the Plaza’s fountains have been turned on.  It is our own little bit of heaven.  Pomona, an original sculpture by Donatello Gabrielli, is the Roman Goddess of the Earth.  She stares out on the Plaza as though aware of our comings and goings.

The Plaza is at it’s very best.  Ready for tourists and locals alike.

Have a great day!