It’s Spring, or so the calendar tells us.  In Petaluma the trees are flowering, lemons are growing, Meg and Jake take long walks by the ocean.

Here in Kansas City, the trees at Loose Park tell a different story: 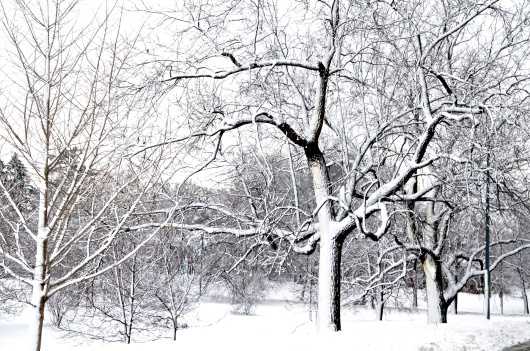 Yes, the calendar says Spring.  The weather says winter.  Our third significant snow fell yesterday and into the early morning.  It is beautiful.  We are close to ending the drought.  Eventually our gardens will be grateful for the extra water. But today, drive ways need to be shoveled and cars are stuck in the road.

But, hey, it is still Spring.

Kansas City is known for jazz. While not the birthplace of the music, it would be fair to say that jazz “grew up” here, and has become a part of Kansas City’s cultural identity.  It is not surprising, then, that it is performed in bars, nightclubs and the local parks.

Kansas City Parks and Recreation’s free jazz concert at the Rose Garden late last summer was just my cup of tea.  Mike White, former Jackson County Executive and a prominent Kansas City attorney, is also a jazz musician.  When Mike wants to play, there is always a crowd anxious to hear him!  People brought chairs, blankets and picnics to the concert and made a night of it.  Listening to the sounds of jazz while hanging out with neighbors and friends on a perfect summer night is just hard to beat.

iPhone camera. The reflections were unintended, but I think they enhance the mood of the photograph.

After considerable research I recently purchased a Nikon D5100 DSLR camera.  I am re-learning how to use a “real” camera while reading a primer, entitled Nikon D5100 From Snapshots to Great Shots, by Rob Sylvan.  It is a great tool for me, despite my struggles to even remember the language of photography.  Terms like “rule of thirds”, “mode” and “ISO” fill the text as I learn the features of my camera and begin to explore its potential.

When I am weary of reading about my camera, I jump in my car and go find interesting places to photograph. I take the same shot over and over using different features on my camera.

Here is a photograph of the Rose Garden Fountain at Loose Park using auto focus.

Here is the same scene using the color sketch mode on my Nikon.  This mode creates photographs that are similar to water colors.  Go figure!