Branson at its most elegant-The Chateau at Table Rock Lake.

My holiday decorations are not complete without orchids.  This year I bought my orchids from Bird’s Botanical, a family owned business located in the caves at I-435 & 23rd Street, in Independence, Mo.  Only open for business on Tuesdays, it is an adventure just to be there.  The orchids run the gamut of colors, shapes and sizes.

I thought it would be fun to photograph this particularly interesting bloom.  Relying on my D 5100 Nikon and my Tamron zoom lens, I took a number of shots using flash, long exposures, short exposures, and “Auto”, as well as taking photographs from a variety of different angles.  In picking from all of the photographs, I eliminated some because they were blurred, over exposed, under exposed, or just bad.  I finally decided to show you three.  They seemed to me to make the cold winter day a little less dreary.

May your new year be as lovely as this flower.

Our trip to Cuba ended much as it began. We were overwhelmed by the beauty and the poverty of this tiny island nation.  But now, after months of preparations, days filled with visual images we will never forget, and photographs that will end up in posts far into the future, it was finally time for us to pack our bags for the journey home.

As we were preparing our bags Saturday night for an early morning departure, I watched the hustle and bustle of Havana.  Neither the city’s great beauty, nor its decay, were visible in this nighttime shot.  Left to admire is just the vibrancy of the city.

It was a memorable experience.  While our visit only touched the edges of this wonderful country, I feel fortunate to have had the opportunity to experience its rich culture, wonderful people and incredible beauty.

If you haven’t experienced Cuba, put it on your bucket list!

You remember Meg?  My co-author.  That’s right, that Meg.  As the balance of her life has shifted to what seems to be a 24/7 schedule, she has disappeared from our blog. I found these photographs of Meg I took using the color sketch “effect” on my Nikon. 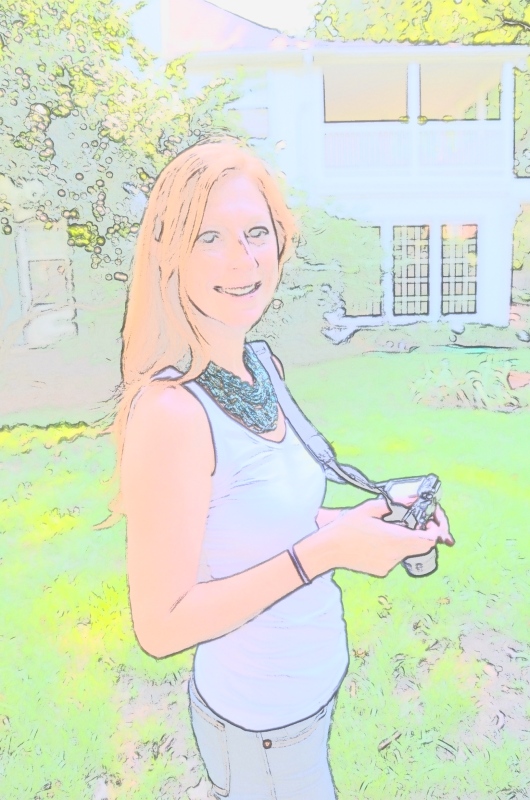 Just my way of assuring her that her presence is missed and that I am glad that she has only “faded away” temporarily.

Love you Meg. I will see you back on “Shifting the Balance” in November, when the balance of your life shifts back to a schedule giving you more time for Jake, Lily, Cousteau and the blog.  You are missed!

It is raining.  The weather is cooling down.  Since Meg and Jake are visiting next weekend,  I want to rejuvenate the yard by giving it a little color.  Casey and I stopped at Farrand’s Nursery in Independence to find mums, my favorite fall flower.  Because of the weeks of extremely hot weather, i was told the mums aren’t ready to bloom, and I was encouraged to return in a couple of weeks to pick my favorite colors.

Disappointed it would be too late for Meg’s visit, and with no particular schedule, I decided to give myself a treat by driving home through rural Independence.  I took back roads with which I was not familiar just for a bit of adventure. The “no trespassing” sign caught my attention first.  Then I saw this dilapidated old stone house on the side of the road.  Fortunately, my Nikon was in the  back seat. It seemed to be the type of scene which would be most satisfactory in black and white.

Terry and I are pretty independent souls.  Our work lives keep us busy during the day and our clubs, committees and boards take much of our spare time.  But Fridays after work and Sunday mornings are our time.  Virtually every Sunday morning you will find us in the car with our dog, Casey, with a destination in mind, preferably pet friendly.  We combine breakfast with a drive through an area of the Kansas City metropolitan area that remains unexplored or, in this case, under-explored. This morning was no exception.

It is hot here.  But Casey would not understand if we don’t include him in the morning explorations. That significantly limits the restaurants where we can eat to those that are dog friendly.   He knows, really knows, the rhythm of our lives and which day of the week is for the three of us.  Today Terry selected a restaurant on the North edge of the Crossroads District of Kansas City.  I walked just a block to photograph this  view of Kauffman, Webster House and the Bartle Hall pylons.

Y & J’s Snack Shop is eclectic to say the least.  Obviously a haunt for both young city dwellers and middle age professionals , I had never noticed it until this morning.  But it was inexpensive, the food was good, and Casey was content.  The staff even provided water for pets.

The aesthetics of the so-called “snack bar” were minimalist at best.  Tiny, with a kitchen smaller than my own, the cook served such standards as bacon and egg sandwiches, coffee and a variety of breads.  The decor was not even shabby-chic, it was just shabby.  The door was covered with stickers of various sorts.  The tables and chairs were plastic and metal.  Nothing really matched.  But the environment was casual and accepting.  Obviously, many patrons were regulars and felt right at home.  Even for first timers it was a happy place to spend some time.

We wandered the block or so surrounding Y & J’S, and were surprised by the variety of retail stores, coffee shops, businesses and an urban garden, all sharing adjoining spaces.  I can’t even tell you the address, because street signs were few and far between.  But one business had prominently displaced its address as 1818 something.  It was a true urban experience made more satisfying because we know it is part of the rebirth of our central city.

They obviously weren’t talking about this particular flower.  But they could have been!

So dead head your flowers if its time, but don’t forget to stop and appreciate the beauty of a dead flower.